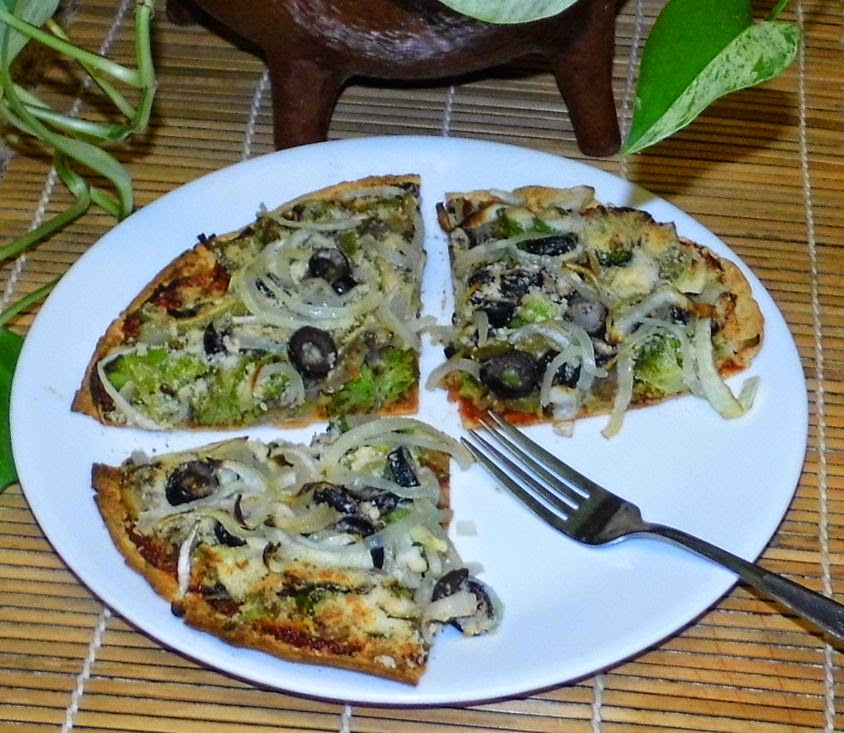 I know I'm not alone in this. But I used to take it to extremes.

I could personally down a couple of large pizzas, any toppings included.

No wonder I had two heart attacks, with a life history like that!

And I've missed the occasional pizza fix. OK, OK, I have indulged in the last couple of years, especially since the all-you-can-eat Pizza Monster Café opened locally, but rarely, and in much smaller quantities.

No more than two pieces of pizza twice yearly for me now, thanks.

At least that's what I thought, until this delightful thought occurred. I'm pretty sure I'm not the first, and if you Googled the main ingredient, I'll bet you'd find it out there somewhere. But it's original to me.

Start with a veggie pizza. Throw out the crust. OK, yes, you'll have to start from scratch with your own crust.

But here's but beauty of it. YOU CAN MAKE YOUR OWN CRUST FROM A TORTILLA. Waaaayyyy less carbs. And cheeeeep. The crust (1 large tortilla) on this baby cost me about 12 cents. 'Course, I had to buy 30 at Sam's Club to get that price.

Too thin, you say? Hah. See the above proof.

So here's what I used to make it work:
I prepared the crust above by drying it out in advance in a warm, not hot, oven. If your oven is too warm the tortilla tends to warp and be difficult to use.

Put your tortilla on a baking sheet and assemble your pizza. No oil is necessary. As needed, I can assemble two pizzas on 1 cooking sheet, but one makes for no trimming due to overlap. Or, I can get 3 regular tortillas on one baking sheet.

Tomato paste works best, as it doesn't soak into the tortilla and make it too soft. Plain tomato sauce makes for a mushy crust.

For seasoning I sprinkled on pizza seasoning blend from Winco, but any Italian seasoning works.

The brewer's yeast adds a kind of cheesy taste. My wife, who won't eat anything she's not used to or sure of, wouldn't. But I like it, and it  adds vitamin B12, good when you're light on meat in the diet.

I used 1/2 a green bell pepper, a cup of fresh broccoli, plus 2/3 of the yellow onion and 3 large sliced mushrooms. Other possibilities are red bell pepper, green beans, red onions, cauliflower, green peas, sugar peas, cabbage, shelled edamame, or any non-starchy vegetable that won't turn to mush. Therefore I don't use zucchini.

The key is to dry the veggies as you cook them, so I loosely stack them on the crust so the oven dries them out as they cook. This is really the key step, and takes some practice.  Mushy-wet veggies make for a mushy-wet crust.

Sprinkle a little grated parmesan on top of the veggies. Too much and you smother the veggies and keep them from drying out. Plus you void your nutritarian warranty on this one.

My ultimate pizza always has toasted onions on top, so I save 1/3 of the onion, thin sliced then cut in half, and separating the strands as I randomly scatter the onion on top. Cook in the hot oven until the onions and parmesan start to turn brown.

The final step is to spread thin slices or small chunks of raw tomato all over the top after it's cooked. I tend to do this piece by piece as I eat it. In the above picture, I ate one slice for my dinner, then froze the rest. Yes, I did pull this out of the freezer for this picture. Is that cheating?

There are two important principles to emphasize. First, keep everything dry. Nothing that is actually liquid should go on your tortilla. Of course, there's always a fork if it goes soggy. But the attraction of a pizza is having a crisp crust so you can pick up and eat your pizza by hand, in my book.

Second, don't eat too much of this too often. It's low carb compared to regular pizza, but I try (and sometimes fail) to eat only a couple of slices in a single meal,  and not to eat this too often.

If it was life and death I'd have to quit it completely.

But for now it's better than saying goodbye to pizza forever.

The acid test is my weight. If I'm at or progressing toward my ideal weight, it's ok. If I'm struggling, it's not.
Posted by David Higbee at 10:28 PM 1 comment:

This last week I gave my first public presentation on nutritarian eating, to about twenty folks at an "Empty Nesters" pot luck dinner in Salt Lake. This group of adults meets monthly in the neighborhood where we took care of my father.

And what a wonderful group to learn from and practice with. We knew almost everyone there as friends, and they seemed both interested and appreciative. We were also able to say goodbye to the great group of people they represented, the Little Cottonwood 1st Ward of the LDS Church, and hope we stay in touch.

And the next presentation will be better as a result.

The purpose was to firm up my own understanding and explanation skills, connect with a bunch of people I care about, and establish some goals central to the purpose of this blog, The End Of Disease. It took me a couple of days of thinking about it to develop this further.

Of course I want to learn and spread the good news of what's possible, really my central purpose here. So how best to do that?

A monthly dinner club, with a focus on preparing, practicing and sharing nutritrian foods, has possibilities. To be able to gather, reinforce and learn from people with a similar focus is very appealing to me.

So here's an outline for how this might work:

When I attending the 1-day Intensive Seminar by Dr. Fuhrman in Seattle this last spring, he spoke about a nutritarian Meetup group in Seattle. One thing they do I don't want to duplicate is not allowing any foods with animal products (nutritarian eating is not vegan, but vegans can be nutritarians, and way healthier!), and it seems they tend to meet a local restaurants (too few in my area with a vegetarian emphasis to make this work).

So I will try this as I continue to search for avenues of communicating the power of nutritarian health.
Posted by David Higbee at 6:34 PM 1 comment:

Email ThisBlogThis!Share to TwitterShare to FacebookShare to Pinterest
Labels: Support

Some people may even pay you to take away their excess zucchini :)

It's super easy and inexpensive.

The zucchini is unpeeled and raw, just grated.

The sauce is Prego. Nothing special. Tastes fabulous as far as I'm concerned.

The white stuff on top is grated parmesan cheese. Any commercial brand will do. I buy mine in bulk, straight from the bulk bins at Winco.

Keep in mind the above picture was taken for illustration purposes, before I smothered it in more spaghetti sauce and added more parmesan.

Now some would fault this for 1. A tomato sauce that has sugar and salt in it, 2. Parmesan cheese that has animal products and salt, and 3. Not one darn thing pictured here is certified organic. I think but I'm not sure my source gardener for the zucchini doesn't use pesticides, and zucchini in general doesn't need any.

That's why there's often such an explosive abundance. And the zucchini pictured here was one of those extra-large ones that most people don't prefer, some even throw away, about 2 1/2 to 3 inches in diameter.

Regardless, it all grates, tastes and works just great.

But here's a qualifier. I don't believe I'd get the same great results by using "spaghetti squash." As a winter squash it's far higher in carbohydrates, and therefore calories. Nothing wrong with it nutritionally, it's just the tradeoff between quantity and calories. You can have one or the other, But if you have to take or keep the pounds off, a little bit is great, a lot is not.

Here's the saving grace. I ate three huge bowls full two nights in a row, and weighed in at less than before.

Now that's the kind of (non)diet I can live with.
Posted by David Higbee at 7:47 PM No comments: