The Limits of chEating

One of the attractive things about the nutritarian life style is that it's flexible, and even allows eating meat. Dr. Fuhrman suggests many people can be completely healthy and still "cheat" with up to 10% of your calories.

Even the occasional candy bar or dish of ice cream is OK. The key is occasional. Very.

So how do you apply this? What does it mean on a  real-life basis?

Now over the almost six years I've eating this way, I can count on one hand the "normal" meat and potato, processed food type meals I've had, that were my norm before. I just don't like to eat that way any more. But I've enjoyed the flexibility, and it's kept me on track. A more rigid format might have discouraged me.

And even though I'm not perfect, my recovery is good, compared to where I was headed.

It's made it easier for me to do this long term. I enjoy some added calories nearly every day, usually in the form of a few extra nuts or seeds. Since I don't count calories, but I do weigh in and check by my exercise tolerance my progress every day, I know what works for me.

You could reserve those 10% of calories for a weekly regular meal if you wanted.  That means basically you'd have twenty one meals during the week, and one would be the standard Anerican diet type meal. The other twenty would be full bore (and by full I mean rigid, inflexible, strict and totally) nutritarian.

Realistic? I don't think so. If  you can excuse one meal, how can you not excuse other slippage? I really don't know, and clearly I don't believe in this approach because I can't see it working for me.

My personal preference is different. What makes it work for me is to do the very best I can at each meal, and in general add a little something every day that makes my food more enjoyable.

Something still in the healthy direction, however. I don't consume a candy bar every day, or even every month.

I let my weight be my guide. I can tell when I've loosened up too much because I weigh more, and I immediately correct course. Even a couple of extra pounds is a good early warning. I consider an extra five pounds to be an all out danger signal, and tells me it's time to buckle down.

Emily Boller, one of Dr. Fuhrman's favorite examples, tells (in a seminar video by Dr. Furhman) of a friend who eats  nutritarian during the week and regular on the weekends. By my calculation this means her friend takes in about 50% or more of her calories from a combination of low nutrient density, processed, meat and dairy type foods.

Emily says her friend has done all the work to learn how to eat right, but she gets none of the benefits. No weight loss, and no difference in health outcomes. None.

So while nutritarian eating isn't all-or-nothing, I'll hazard an opinion here that it takes 80%+ compliance to make it more than mildly effective. Real effectiveness for ordinary conditions doesn't come into play until you're over 90% compliant. For a serious condition you really have to become compliant in the 95-98% range, which means really striving to be 100% in the game.

The good news is, eating right most of the time, and building in a cushion by eating better than necessary instead of pushing the limits, is a delight and a pleasure.

Old habits intrude. The constant barrage of misinformation from a sick culture takes its toll. But the best part is, you come to trust that the plan works, every time you work it. And when you don't work it briefly, you just get back on that horse again and ride it, because you've proved that it works.

The greatest pleasure of all for me is to be alive, healthy, productive and experiencing this life with my lovely wife.

Both of us are medical anomalies. We're still alive in spite of each having health conditions that were supposed to be incurable. We have survived the biggest challenges of all, which are 1. A sick culture and 2. Our minds not always being made up to eat right.

Which goes a long way towards a happy life, because (obviously) we're not dead. And which inspires us to sweetly, gently but persistently encourage family, friends and y'all to join us.
Posted by David Higbee at 2:49 PM No comments:

Whaddaya Mean, The End Of Disease?

I mean to speculate here, really extend the line of logic, outside the bounds of reason and rationality, into the realm of fantasy and speculation.

Based on some educated guess work. Plus some speculation on what some would call the "ultimate ideal."

No doubt I'm going to be wrong on parts of this. Maybe some big parts. So I'll start with what I understand and "know," then extrapolate from there.

Fair warning, though. I end up making some religious references. But for more specific religious details I'll refer you to my other blog, www.AMormonNutritarian.com.

1. Dr. Fuhrman, the founder of the term "nutritarian," is a man of science. He came into his medical training with an orientation that caused him to look beyond standard interpretations, dig into the research and find substantial backing for a radical new approach to disease treatment and prevention.

2. I find his conclusions to be well-founded and based on both a thorough review of the complete body of nutritional research and his treatment of real-life patients, with startling results. Conflicting and competing dietary systems are either based on an incomplete review of the research, varying degrees of incorrect applications, or correct applications with the wrong emphasis or degrees to which they must be applied to be effective.

Again, this applies to more than Dr. Fuhrman, which application continues below.

4. I've also seen how his enthusiasm has caused irritation in some quarters, with claims that his certitude exceeds his grasp. I think he's a true visionary who bases his opinion on sound research and sound experience.

5. His nutritional recommendations are also medically benign, and in general compatible and not interfering with standard medical protocols. If used with regular medical treatments, they can still be the best, most effective measures possible. More complete recoveries than otherwise, surpassing the effectiveness of normal medical  treatment, and minimizing the harmful effects of drugs and other treatments, are all possible.

7. Plus, if conditions are not well treated by his protocols, there's real evidence that earlier use of his nutritional principles can prevent these conditions before they become medical problems.

8. Extensive application of the nutritional preventive approach, including maternal prenatal intervention, may make for even larger impacts on the health outcomes of the population.

9. Because dietary habits and food preferences are completely learned, a completely radical and positive transformation of our health outcomes is possible, because we have unlimited potential to re-learn. When we use this power and implement these changes universally, with early, willing and joyful understanding what the benefits and outcomes will be for us and our children, we will be at an advanced stage of the revolution.

10. The impacts of a total eating revolution are potentially so incredibly powerful, that this could be a total revolution of our society. Our beginning to grasp the meanings of Dr. Fuhrman's and others findings mean that we should start focusing our incredible abilities to research and analyze in a whole new, food-based direction, leading to even more positive results.

11. The end of virtually ALL disease would be a logical extension of this overall process.

12. There's a part of us that knows we are meant to be happy, that it's the ultimate goal and possibility of all our lives, and that the potential to have a disease-free society really stands for something even greater. I'll call it the ultimate good.

13. This ultimate good is so powerful and far-reaching in its implications, that for me it can only be felt, not fully described. It's really a sort of impossible to fully describe or comprehend  but not impossible to hope for ideal. It's the kind of thing that should make us want to use our desire / dreams / power / freedom / love / belief in the goodness and potential within our souls to bring it about.

14. To accomplish this would mean radical changes, radical choices, and probably completely unforeseen alterations in our hearts and our society.

Impossible? No. Unlikely? On any given day, you bet.

But I believe it's coming. Maybe sooner, maybe later. But coming.

Some day.
Posted by David Higbee at 11:14 PM No comments: 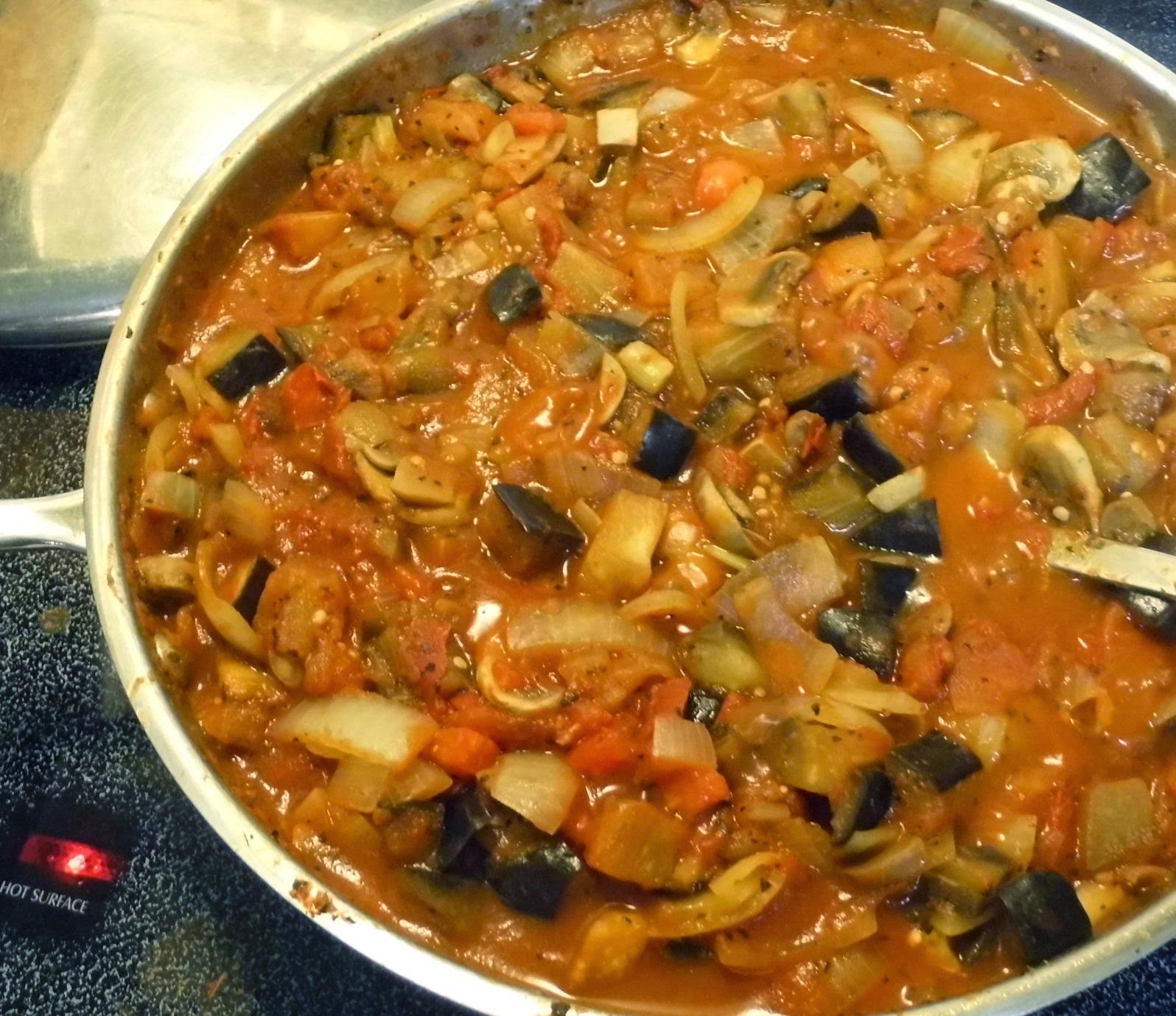 When the French make a dish, it always sounds exotic.

I call this Eggplant Ratatouille, but I could have called it Eggplant Stew. Or Cacciatore.  Or Gazpacho. Or Goulash, or Pottage, or a dozen other things. Only the country, seasoning, temperature and language differ. Insignificant things, really.

The point is, vegetables in season, mixed, heated, seasoned, served and eaten.

These are the things that really matter.

So here's my favorite ingredients: Eggplant, zucchini, sweet peppers, onions, garbanzos, tomatoes, mushrooms, Italian spices (oregano 1 1/2 t, marjoram 1 t, thyme 1 t, garlic 1 t, basil 1/2t, rosemary 1/2 t, sage 1/2 t, red pepper 1/4 t). Slice/dice, cook until done, add spices any time. Arrange attractively in a baking pan for maximum effect, or put them all together to save time as above. Add more stuff if  you've got more stuff. Start with 1/2 seasonings amount if you want to be cautious, it's easier to add seasonings later than double the recipe because it's too strong. Add a little meat (-balls, chicken) for a less healthy dish.

To think that a set recipe matters is to lose some of the intent and possibilities. Not that I'm opposed to recipes. But sometimes it's just right to go with what you've got.

This time it was just eggplant, onions, tomatoes, tomato sauce,  mushrooms and seasonings. We just chopped them,  put them in the pan, heated them up, added a little seasoning. We ate it hot, we ate it cold, we loved it. Even made more the very next night. We had more eggplant, after all.

Here's another principle. We often engage in "recipe roulette," where we take a CD titled 1 Million Recipes, put in a list of ingredients we've got on hand, and see what the possibilities are.  Or we play "recipe roulette" by Google search.

Here are some other principles.

Posted by David Higbee at 9:10 PM No comments:

How I Moved The Sun (or was it a mountain?)

I live in a beautiful mountain valley, and as the sun rises to the east, shadows race across the valley floor.

Most people in Utah live in valleys like mine, with soaring mountains immediately to the east. It's because the oldest communities were established at the base of these mountains, to take advantage of streams that run down and irrigate crops. 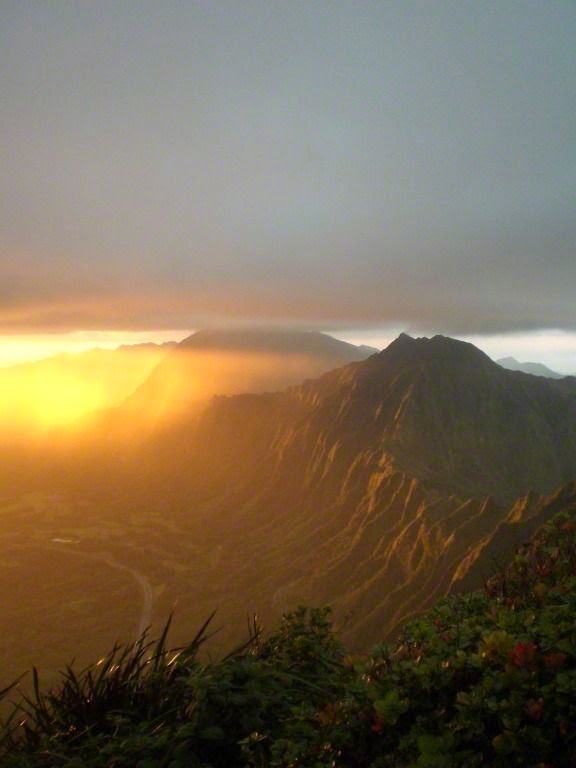 This morning as I ran, I chased the shadow of the mountain. It was moving because of the rising sun, and I had to run fast to catch the shadow. It really did appear I moved the sun behind the mountain.

Or maybe it's just moving the mountain in front of the sun.

Either way, moving mountain or sun, it feels powerful. Even though it's really just a change of location, a change of perspective.

But it reminds me of how powerful it feels to understand the truth about excellent health through nutritarian eating.

It's really just a change of perspective, a shift in my understanding, an adjustment of my attitude and actions based on truth.

The difference in my eating, based on Dr. Fuhrman's teaching, gives me true power, real control over my health.

So is that not a mountain I've moved?

Or maybe it's the sun.

Either way, being in control of my health is a  mountain of an accomplishment. Running fast is proof.

In fact, I've experienced a shift in my entire universe.

Thanks, Dr. Fuhrman.
Posted by David Higbee at 7:44 PM No comments: